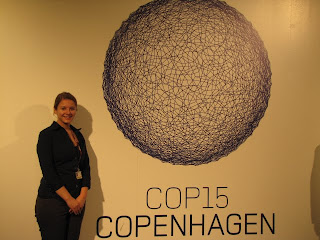 Upon arriving back in the United States, I was flooded with relief to be back on familiar territory. My trip to Copenhagen was undoubtedly a long one, but successful at that. Feelings were fixed upon the closing of the climate conference. An international treaty was not established but officials had enough sense to lay the groundwork for the next Conference of Parties (COP) in Mexico, 2011. I was relieved that the issue of climate change was finally being taken seriously but I felt that people weren’t moving fast enough! Slow and steady seems to be the motto that officials around the world use; regardless of whether swift action was called for or not. A lesson to be learned for all those eager for change out there; progress takes time. In the meantime, until the issue of climate change is solved, I will continue to work fruitfully in my own backyard to ensure that the seeds of change begin to grow.

Actively pursuing climate legislation, my home environmental group is revamping our efforts to engage students with the issues that face the Senate this spring. With the health care bill coming to a close, the Senate will now begin to vote on the American Clean Energy and Security Act (ACES Bill). It is of the utmost importance that a climate bill is passed in order for the U.S. to participate in future COP negotiations. My own personal understand is this; our government will never agree to an internationally binding treaty unless we have passed climate legislation first in our homeland. This is why we must all join together and continue to pressure legislators to vote green. Throughout this semester I will be working directly with NDSU’s student body government to coordinate events focused around climate legislation. I will also be giving talks and lectures to the local community on topics such as biofuel, oil-dependency and sustainability. I hope to continue working with grades K-12 in new partnership recently formed with university faculty as well as Repower America, the National Wildlife Federation and the Prairie Stewardship Network. This will be an active time for everyone!