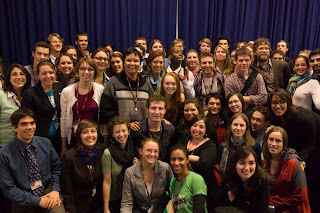 Today wraps up the end of the first week of negotiations in Copenhagen. It’s been a great time here, and a lot of good work has been accomplished. The youth have been an impressive positive force throughout the week and we have received a lot of recognition for our efforts, professionalism, energy and creativity. I think it’s a great time to take inventory of what has happened, and to reiterate our position as youth on these negotiations. Monday, December 7th: – Opening session of COP15 with IPCC Chairman Dr. Rajendra Pachauri, UN Secretariat Yvo de Boer, COP15 President Connie Hedegaard and others. – First International Youth Climate Movement action- Flash Mob Dance! Watch the video:

Wednesday, December 9th: – Rapid Response team is created! The US Youth are calling friends back home to get them to engage their Senators to vote for domestic climate legislation based on science. Tuvalu protests Danish leaked text outside of a plenary session.

Thursday, December 10th: – Young and Future Generations Day: 1,000 youth wore bright orange t-shirts that read “How Old Will You Be in 2050?” and “Don’t Bracket Our Future” bringing light to the issue that youth will bare the brunt of climate change. – Indian Youth Representative gives amazing speech at meeting with Yvo de Boer – watch the video US and Chinese youth meet to discuss commonalities between our countries and develop strategic positions and actions for the negotiations. Watch the resulting press conference. 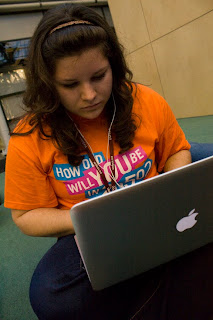 Friday, December 11th & Saturday, December 12th: – Biggest march around climate change ever. The streets of Copenhagen were a sea of lights when over 100,000 people joined together in a march for international awareness of climate change issues and calling for a legally binding treaty at the end of this week based on science. Watch the video.